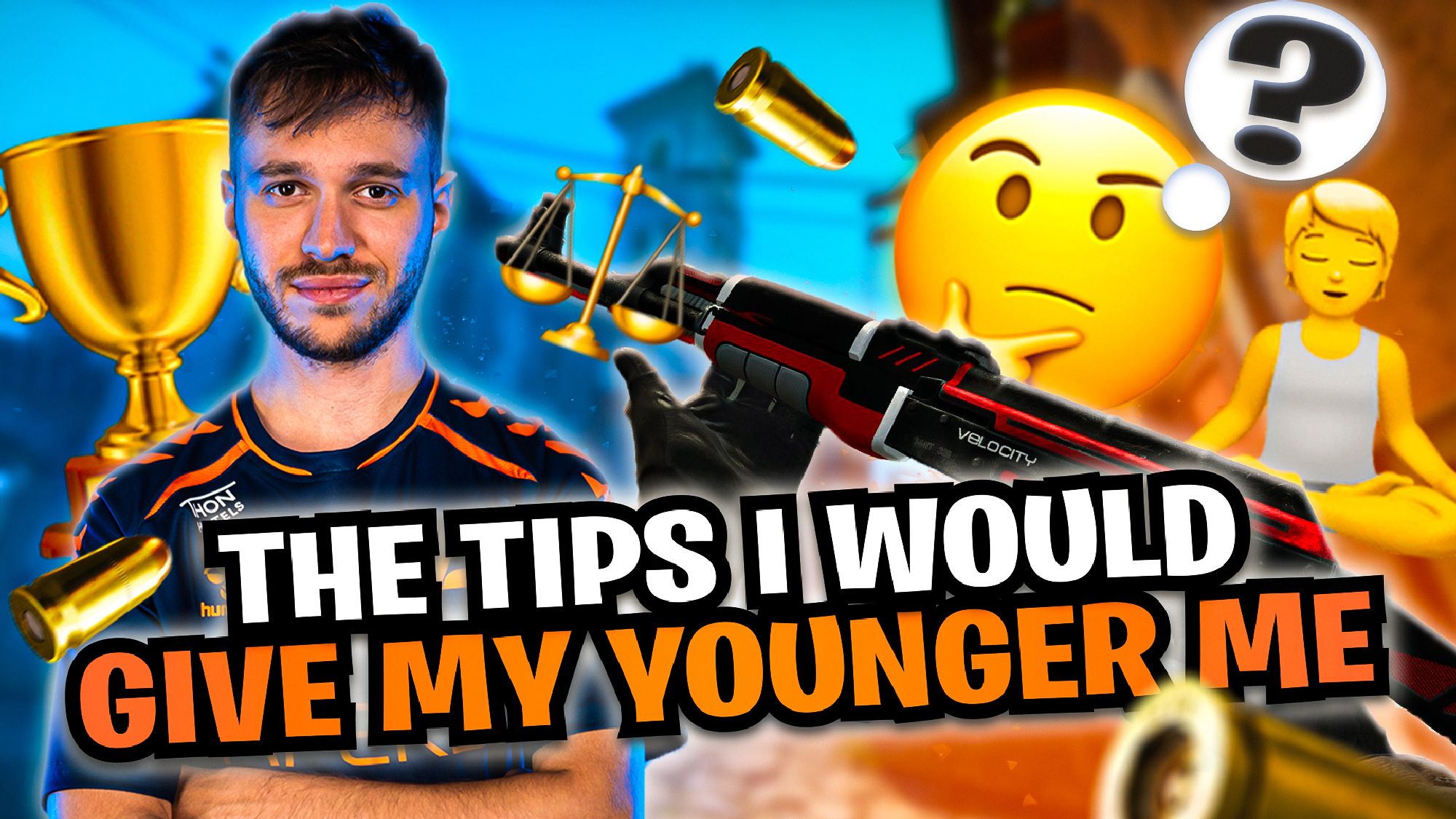 Esports changes fast. It is unrecognisable to what it was twenty, ten, even five years ago. My career is shorter than many others – I’m far from a grumpy grandad – but I have seen the impact of this first hand. When I was growing up some of the best players in the world were making below what was average for their country, Slovakia included. No matter how good you were, while I was a teenager gaming could not be anything more than a hobby.

Now, there are a thousand ways to break through. Content creation is accessible to anyone; social media lets you build a network from nothing; platforms like FPL-C, Academy leagues, Varsity leagues, esports seminars and so many more.

Yet, despite all the change, so much of what goes into becoming a professional has remained constant. So here are 11 tips that I wish I knew in 2015 as I was signing my first contract with HellRaisers.

1. 🐦Keep up your social media presence

Despite all its flaws, social media remains a very useful tool. If you are active there you can build up both a following and relationships with people who have the power to change your career for the better. Having your own ‘brand’ also means you have something to fall back on if you are ever cut from a team and need income from streaming or content creation. Your followers count is a number that becomes increasingly interesting to potential organisations who might be interested in you. Having a strong media presence and solid image on multiple platforms may be a determining factor between an organisation deciding to offer a contract to you or someone else. Your name becomes more valuable and lucrative as you have a bigger chance to bring money into the team via sponsorships or bringing your community of fans.

Your reputation is paramount to success as a professional; it only takes one bad story for players to choose someone else over you. Being nice to people is free, and so is avoiding pointless arguments especially with people who are just better at arguing than you. Arguing with people who write for a living like journalists can only go one way for you. If you really have an urge to stand up for yourself and your opinion, there are always ways to do it privately (DMs, email…) and ultimately it might be a wiser choice over doing it publicly through tweet or stream. Everyone can see the interaction, the heat and tension between people so if there is option to avoid these “public dramas” you should use it.

3. 🧓Take any chance you can to get active AND passive experience

Attends in-person events as a player whenever you can, even if it’s a run-down local LAN. Experiencing an adrenaline rush before a huge game is invaluable, whether that comes from simply being able to see your opponent over your PC or being on a stage. The earlier you learn to deal with this pressure the better.

Passive experience is just as valuable and there is so much more content now than there was for me in 2015. Educational videos from pro players hold immense value; you have direct access to how pros prepare in and out of the game as well as countless tips and tricks.

I have been ignoring this point for like half of my career at this point. But ever since I started paying attention to it, it really elevated my personal life, gaming life and individual level of play as well. I generally feel more confident on and off the server too. You might think of late nights, energy drinks and takeaway pizzas when you think of the grind towards becoming a professional player but the truth couldn’t be further from that. Regular exercise, a good diet, and getting enough sleep will all improve your gaming performance – and your mental health. Probably the easiest habit that you can start practising right now is meditating and I was sceptical at first, as probably everyone, but it was surprisingly easy to get into and just by 5 minutes a day it had an immense impact on the quality of life that I lead.

Part of that includes protecting yourself against injury. Just think of all your dads with messed up backs – make sure your posture isn’t going to cause problems later in life. You’re going to be gaming for eight hours a day and sitting down for that long is always going to cause problems, but stretching your hands regularly and a proper posture should prevent the worst effects. Proper sitting is something I am actively trying to think about almost all the time. I suffered an injury as a teenager while playing tennis and unfortunately I had to quit the sport. After that I was extremely mindful about the way I sit but after thinking about it for hours every day I realised that I am forcing myself to sit with proper posture, straight back but I am comfortable at the same time. That is very good but very rare at the same time, especially amongst gamers. For stretching your hands I really recommend the YouTube channel of Dr. Levi, which I know a lot of professional players watch to make sure their stretching exercises are optimal.

Yes. A schedule - the thing you did at school. But there’s a reason so many boring adults wanted you to do this. Having a routine helps drum in good habits, leading to better unconscious learning. Routines increase efficiency in various ways: we make fewer decisions every day, procrastinate less, and actually frees up more time since you will be completing tasks quicker. Time is your most valuable resource - make good use of it. This goes hand-in-hand with keeping track of your long-term and short-term goals. Ever since I have played for a professional team, I had access to our team schedule where we kept our deadlines, tournaments, practice and travel data. I have it all saved in my computer until today and I like to revisit them. Few weeks ago I decided to check on our team schedule from 2017 because I was curious how many hours we practised back then and what our day looked like. I found out that we had more scrims per day and we were ending way later in the evening compared to now with our team stuff. That was pretty interesting as it puts things into perspective I would not be able to see without keeping these schedules. I see that nowadays team scrims are oriented to quality, not quantity. Each round matters, there are so many gimmick plays that are doable in any round that your focus needs to be 100% at any point even if you face enemies without a single dollar invested into the round. This would be so difficult to achieve back in those 2017 days because the amount of team practice was almost doubled.

7. 🧑‍⚖️Get an agency or, at the very least, legal help

Sadly, most of the time, your employer doesn’t really care about you. Contracts are written to benefit your organisations while doing the bare minimum legally to compensate you. It is easy to rush into your first contract but that can backfire, and fast. Either getting a trustworthy agency – ask anyone you know about them, players etc. – or at the very least a friend with some legal expertise to look over your contract is a bare minimum.

Organisations know that they are offering you your dream, and that makes it easy for them to lowball you. You have to be selfish when it comes to how you make your living; your value is what you make it.

👉A really helpful tool for this is the CSPPA contract guidelines

Hard-working teammates, loyal organisations, and fair contracts should be the norm in esports but far too often they simply aren’t. These things will come and go throughout your career, sometimes at the worst times when you think you are close to success. Things can unravel in a snap of a finger and returning to where you were is a real challenge.

But, under that kind of pressure, you find out how good you really are. Everyone can frag when you’re in a honeymoon phase but the true test is withstanding hardship and turning a bad situation into a good one. Talent is great, but there are so many talented players who crumbled and never came back from the lowest points in their career. Make the best of the good times - and remember what made them good in the bad.

That, though, doesn’t mean you have to sacrifice your mental health for the grind. Playing another game or taking a full week or so away from your PC is absolutely fine, if anything it should be recommended. Burnout can and will happen to even the most passionate players; player breaks exist for a reason. You are in this grind for the long run and burnout is one of the biggest reasons most careers stall out before they start. Do everything you can to prevent it.

This might not apply to you while you’re young – I was playing 12 hours per day while I was a teenager living with my parents – but eventually, age will catch up to you. If I still played for 12 hours per day I would burn out ridiculously quickly and you never know when, or even if, the motivation will ever come back. Reducing your playtime to sort out things in real life is valuable; you cannot live with your parents forever.

This one comes via former CS:GO journalist DeKay: ‘Complaining is a weak cop-out that only annoys other people. When you want to complain, ask yourself: "Will this matter tomorrow?"99% of the time it won't.’

And he’s right. Your teammates won’t care that you got bad timing - they just want clear and concise information so they can focus on their own crosshair and sound cues.

In the same thread, DeKay said that “never taking a risk is a sure-fire way to have regret as you age. Place small life bets that have way more upside, than downside”. This stayed with me, as did this image:

This is the gist: as soon as you are doubting your current situation, you are in a position to do something about it.  Don’t try to just wait it out and hope it will change - take a risk that is, most of the time, very much worth taking. It’s hard to leave something but ultimately, thanks to this, you are exiting your comfort zone which is making you stronger, more experienced, and most of all: happy.

We’re done! The path towards becoming a professional isn’t easy, even with these tips,  but I hope these help. I genuinely believe that following these eleven principles will make your career better, longer and less stressful.

All that’s left to say is good luck - and make the most out of your gaming journey. You won’t regret it.

And friendly reminder: Be who you needed, when you were younger

👁 Hey there! We are having a bit of a special day today. This will be the first analysis where I chose the demo that we are…